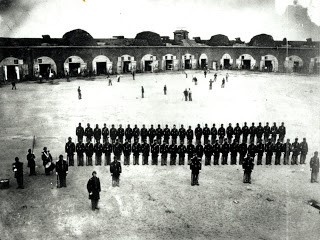 WHEN IT COMES TO THE ALL-AMERICAN PASTIME of baseball, Savannah knows how to hit a home run! We have had baseball in Savannah for almost as long as the sport has existed—in fact, one of the earliest surviving pictures of a baseball game was taken in 1862 at Fort Pulaski, just months after the Union forces arrived in Savannah.  The picture above shows the neatly lined up 48th New York Volunteer Infantry standing at attention, and behind them other soldiers are playing a game--though I hesitate to call it quick, since it's baseball after all!

Baseball was introduced to the South during the Civil War, and the staff members at Fort Pulaski have tried to keep the tradition (with original rules) alive. There are no baseball gloves, pitchers (or hurlers) throw underhand, and a batter (striker) is called out if the ball is caught in the air or after just one bounce.

Since it was built in 1926, baseball fans have been flocking to the Grayson Stadium. Originally known as the Municipal Stadium and home to the Savannah Indians minor league team, the Municipal Stadium became the Grayson in 1941, named after a Savannahian alderman who campaigned successfully to have the stadium rebuilt. The stadium has seen some of America’s most iconic baseball players take the field; Jackie Robinson, Lou Gehrig, Babe Ruth—even hosting the famous ‘Murderer’s Row’ New York Yankees for an exhibition in 1927.

Savannah has been home to many teams, but the most recent iteration is the Savannah Bananas. Full of talent and entertainment, they have a huge fan base and made history as the first team to play a whole game in kilts during their “St. Patrick’s Day In July” event. From the Banana Pep Band, the Dad Bod Cheerleading Squad, and the breakdancing first base coach, the Savannah Bananas are absolutely NOT to be missed! Their games are always sold out, so it's best to get them as far in advance as you possibly can. Just check out their video below!