The Biggest Holiday In Savannah 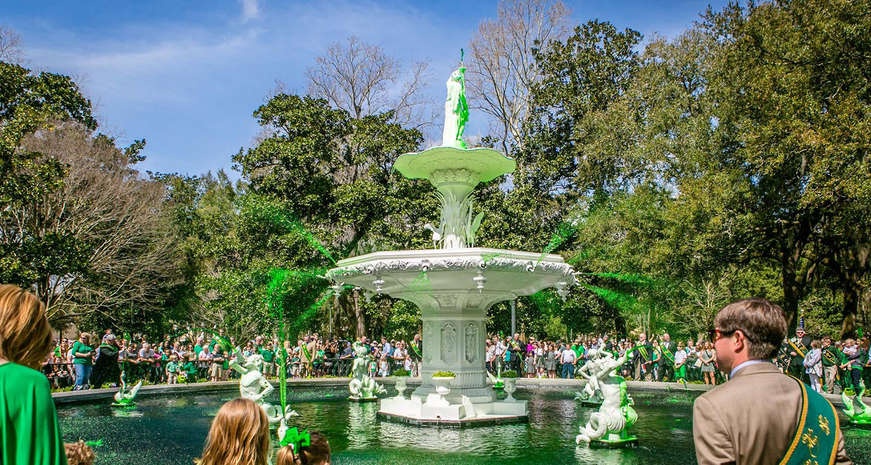 PEOPLE WHO AREN’T FROM HERE THINK I AM JOKING when I tell them what a big deal St. Patrick’s Day is in Savannah. But I swear to you, this is the biggest celebration you have never heard about, and we take very, VERY seriously. So seriously that we Savannahians host the biggest St. Patrick’s Day parade in the entire United States outside of New York City! So seriously, in fact, that over 400,000 people come to celebrate—that’s twice as many people as live in Savannah! The fountain in Forsyth Park is dyed green, mass is said, and hundreds of thousands of green-clad drunken revelers crowd the streets. It's not just an event, it's a HAPPENING.

The question, really, is…why? Why would a quaint Southern city most famous for picturesque city squares, pecan pralines, and That Movie turn into a 24-hour Irish extravaganza?

Part of it is history. The Irish began arriving in Savannah on the first boats to transport settlers in 1734, and at least nine of the first Georgia colonists to be granted land were Irish. In 1812 the Hibernian Society of Savannah was founded to help needy Irish immigrants (and incidentally began the St. Patrick's Day parade tradition just 12 years later). The real boom happened in the 1830s and 1840s, though; willing to work cheaply, a flood of Irishmen became the backbone of the operation to build canals and railroads across the state. When the potato famine hit Ireland in 1845, more and more people were looking to escape starvation and came to Savannah for work; one study says that by 1860 one in three households in Savannah were Irish-born immigrants!

After the Civil War and the Industrial Revolution, many of the northern cities like Boston and New York turned away hopefuls at ports in order to keep jobs open for “native-born Americans.” But Savannah was still open to the Irish, who flocked here for the jobs in agriculture and transportation.

So that explains the Savannahians and their attachment to the holiday. As for the out-of-towners who come from Florida, the Carolinas, and even New York? Well, we have beautiful weather, for one, and some of the laxest open-container laws in the country. As long as it’s in a plastic cup and 16 oz. or less, you can take your drink with you into the 70 degree sunshine to party in the streets. The Forsyth Park fountain is dyed green for the occasion, the parade is 3 to 4 hours long, and the Irish pubs are pouring until 3 a.m.

This year, of course, things are considerably different. Due to the pandemic the city has elected not to hold the parade. It should be the first quiet March 17th Savannah has had since 1824. But with the vaccines and with a little luck the Irish are so famous for, we should be back in full swing next year!